A BLOG FROM THE ROAD: PART ONE – THE FIRST SHOW - By Nick Bull

A BLOG FROM THE ROAD: PART ONE – THE FIRST SHOW

Opening night. It's when things get serious for a band.
No longer are they practising in small rooms with just their road crew for company. Time has run out for song endings to be rehearsed repeatedly in the search for perfection. The paying audience won't accept any group coming on stage under-prepared; they want to see the best show they've ever been to, period.

Yet, even after 15 or so years of playing together, and shows ranging from festival headline slots to the Letterman TV show in America, first night nerves aren't far away in the Starsailor dressing room.
“I'd be lying if I said I didn't get them,” says drummer Ben Byrne. “Only a little, mind, but I don't think you'd be human if you didn't.
“Luckily, once you play a couple of shows, you get 'gig tight' with the others and from there you're really on it.”
But there was plenty more at stake inside Leamington Spa's Assembly Rooms, a venue both pleasing on the eye and full of history, come 9pm on Sunday.

Yes, Starsailor played the crowd-pleasing hits ("Alcoholic", "Silence Is Easy", "Tell Me It's Not Over" and, of course, "Good Souls", to name just a few), but also featured in the 16-song set were the first-ever performances two new tracks. It is the season of goodwill, after all.
“Blood”, with its slow build-up, falsetto chorus and melodic guitar solo to end, wouldn't have been out of place on the Silence Is Easy album.

“Never looked so good and you didn't break a sweat, with a cruel ambition that caught me dead,” sings James Walsh in the opening verse, although by that point in the show his forehead was dripping, owing to the ever-lively front-man work he'd undertaken.

Then, played three songs before the end of the main set, “Best Of You” features a fine drum and bass backbone and several lines that will be shouted out by concert crowds in years to come. Word is, the other tracks lined up for the band's next album are even better. Sounds promising, right?
Regardless, this is one of the biggest reasons why Starsailor are such a joy to watch. Too many groups these days refuse to debut new material on the road, fearing the bootleggers or a mass exodus to the bar (possibly even both), but this band have balls and form in this area, too.

"In My Blood", with that instantly memorable guitar and bass riff, was a stand out during their 2004 festival shows, over a year before it appeared on the band's third album. "Tell Me It's Not Over" was perfected on the road in South America, while the 2015 American Tour reiterated that the band's chemistry and sound, not to mention James Walsh's knack of writing a killer line or two, was as good as ever when new song "Give Up The Ghost" got an airing at every show.

“I've been looking forward to playing the new songs, and we plan to throw a couple into the set each night,” added Byrne. “It's good to get them out there, as we all want to see how the fans respond.
“Somebody will probably have taken a video of us playing them on their phone and they'll be on YouTube in the morning, but it's all good exposure! Playing new songs live is the best way to fine-tune them ahead of recording them for a new album.”

Headlining their first UK Tour since 2015's triumphant Greatest Hits shows, fans in the likes of London, Sheffield, Nottingham and Edinburgh are in for a real treat over the next two weeks, if night one is anything to go by.

The tempos were quick, the music was flawless, the set-list pacing was spot on and lead singer James's voice whirled around the venue throughout. A minor problem when his guitar went quiet during “Poor Misguided Fool” was quickly fixed, and the big crowd inside the venue went home happy.
Walsh's on-stage banter continues to get even sharper, too. As he tuned his guitar between “Alcoholic” and “Fidelity”, barely 20 minutes into the show, he remembered he was in front of a crowd.

“I forgot about all these bits in between songs where I've got to talk,” he started. “It's been a while since we've been on the road. But it's great to get to get such a good audience for the first gig, because everybody's nervous, you don't know how it's going to go.”
Then, as the predictable cheers went up from the audience, he quickly added: “This is our last song, good night!”. Cue laughter all round, and a fist bump from bassist Stel.

A reminder that, if this is night one, those fans going to shows over the next two weeks are in for a real treat.

Nick Bull, by day a sports writer, has seen over 50 Starsailor concerts. 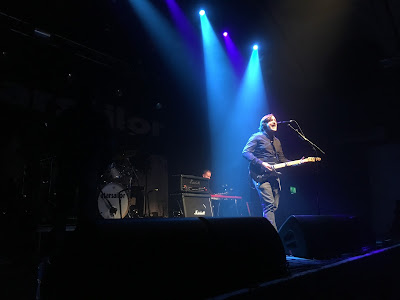