We are very excited to announce a brand new UK tour in October. Check out all the usual agents or go to gigs and tours website and get your tickets now!
Posted by Ben at June 22, 2015 4 comments:

As the dust settles on the US Tour

So the dust has settled and the jet lag is lingering. Getting easier but still feels like I'm moving in slow motion in a full speed word. The last few gigs were fantastic. A fitting end to an enjoyable tour. Toronto was a particular highlight for me. The US crowds have been great, excitable, warm and welcoming.

The Canadians (sprinkled with a few ex pats) found a new level that night though. The legendary Horsehoe Tavern was electric that night as the crowd spurred us on to the performance of the tour for me. Amazingly despite the searing heat in the venue they managed to keep the energy up and spur on Embrace too! New York was a good one too. We had a day off in Bowery before the show. Some of the Embrace crew hired bikes and rode the whole of Manhatten. 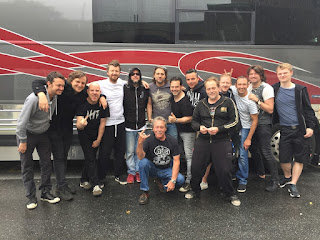 We took a pilgrimage to Bleeker St (Where Dylan, Hendrix, Joni et al plied their trade) and the famous Cafe Wha? Then I had a a slightly boozy night with Richard McNamara and his New York resident brother in law. The next day hangovers dealt with it was onwards to Webster Hall for the show. It was daunting going on after Embrace for this one. About 50 Embrace fans made the trip from the UK and were cheerleading the remaining 400 or so people into a frenzy! We needn't have worried though there were some enthusiastic Starsailor fans too and the Embrace fanatics stuck around for us. We enjoyed chatting to everyone after the show and it was good to catch up with friends and relatives who are based over there now.

The final gig of the tour was in Boston. As soon as we arrived we were greeted by fans looking for us to do a photo or sign an album. We're so grateful we still have passionate fans like that who have waited a long time to see us in their city. I must admit it was a little deflating to see a depleted crowd after such a busy gig in New York but the fans that were there absolutely fanatical for us and Embrace so it was a great show in the end. All thats remains to be said is thanks to Mike Hayes(US Agent)Steve Lyall (TM),Lez (TM),Beaver (Stage Tech),Tom (FOH & Monitors),Danny (Embrace),Richard (Embrace),Micky (Keyboards),Mike (Drums),Steve (Bass) and last but not least the inimitable Curt the driver for an unforgettable tour! Now where do we go next?
Posted by James at June 21, 2015 2 comments: