A message from the band

Hello Everyone, 'Steve. What times sound check? Is it catering or buy out today?' Hang on. I've not woken up on the bus I'm in my own bed. Back in the real world having to fend for ourselves. The end of a tour is always a strange time as the musician gets used to living in the real world after living in a bubble for a month or so. I'm sure Attenborough could do a class documentary about it!

So the tour. It’s been a brilliant one. Great fun to be back on the road with the boys. Too many highlights to list them all so I'll keep it brief. Best gig? For me, Shepherds Bush Empire closely followed by Amsterdam Paradiso, the crowd was amazing in Manchester as they have been all through the tour but it all just clicked for us on stage in London. The perfect storm of a great venue and us being road worthy as the bus pulled in for the last UK date. The Paradiso was amazing too. We were flattered so many people travelled from back home to see us but the Dutch & folk from nearby Belgium & beyond did their bit to create a brilliant atmosphere too. Really enjoyed doing BBC Quay Sessions with Edith Bowman as well. It was nice to catch up with Edith who we've bumped into in many a muddy field over the years & sessions like this are always an opportunity to take the music to a wider audience who tune in online or on radio. Best food? It has to be the lovely chicken followed by our very own personalised tiramisu in Pratteln Switzerland. They know how to put a good spread on! 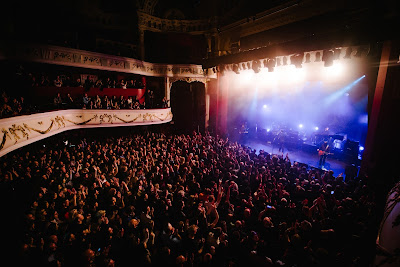 Best support? Ha ha I'm not doing that. They were all brilliant. Kerri Watt who brought her country tinged soulful voice & did a brilliant job guesting on Lullaby. Up Down Go Machine who overcame smashing their van’s back window on the first show to deliver a rousing set of foot stompers every night they joined us. The Sherlocks who are all over the airwaves at the moment and proved just why as they delivered on stage every time, We Are Judas who's brilliant epic rock meant the crowd was treated to a fantastic triple bill on some of the date & Oliver Pinder who joined us in Leeds also added to a brilliant night bringing his emotional acoustic style. Not forgetting the bands that joined us on some of the European dates - Pablo Polar (Switzerland), Kensington Road (Germany) and Seed The Tree (Luxembourg) who were all great.

So finally just a massive thanks to everyone who's helped put together & worked on such an enjoyable tour.