“Whatever language Starsailor speak, they speak from the heart.” – NME

“These are epic songs full of delicate strokes, Waterboys guitars and heartfelt passion.” – The Guardian

Starsailor’s initial run of success saw both their ‘Love is Here’ debut album and the 2003 follow-up ‘Silence is Easy’ hit #2 on the charts as they raced to a total of 3 million sales. Now their biggest hits and fan favourites have been collated in ‘Good Souls: The Greatest Hits’ which will be released on September 18th on Parlophone. 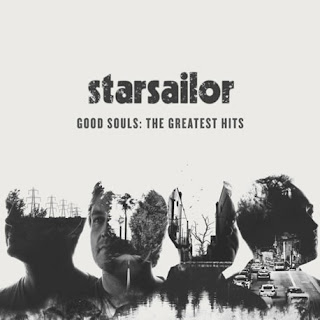 “It's been over 15 years since the band first formed and the songs still mean something to people,” says frontman James Walsh. “They still sing the words passionately back at us at gigs. We hear stories of how songs have soundtracked key moments in their lives. That's why we felt it was the right time to release this album - hopefully if the songs mean this much to our loyal fans this collection can help spread the word wider. People who know us for 'Four To The Floor' or 'Alcoholic' can delve a little deeper.”

The release of ‘Good Souls: The Greatest Hits’ follows the band’s reunion with a triumphant set on the main stage at the Isle of Wight Festival 2014. They subsequently toured as guests to James, before heading off to North American in 2015 for co-headline tour alongside Embrace.
Completed by James Stelfox (bass), Ben Byrne (drums) and Barry Westhead (keyboards), Starsailor shot to prominence with the release of their debut single ‘Fever’. After an early NME live review drew glowing comparisons with Neil Young, The Verve and Coldplay, their 2001 debut album reached #2 shortly before they won the Philip Hall On award for best new band at the NME Awards and Best New Act at the Q Awards. The following year they were nominated for Best British Newcomer at the BRIT Awards.

Released in 2003, their second album ‘Silence is Easy’ featured two songs that were among the last to be produced by Phil Spector and also peaked at #2, with the title track becoming their highest charting domestic single when it entered the charts at #9. The Thin White Duke remix of ‘Four To The Floor’ (featured here as a bonus track) topped the charts in both France and Belgium, and also hit #5 in Australia.

They then released ‘On The Outside’ (2005) and ‘All The Plans’ (2009) which featured Ronnie Wood before Starsailor went on hiatus at the end of the year.

Starsailor recently announced their first full UK headline tour since 2009 which culminates with a London show at the O2 Shepherd’s Bush Empire on October 17th. The full tour schedule is listed on the tour page.