Don't miss James Walsh as he embarks on an 11-date solo tour of the UK in May and June.

Looking ahead to the shows, James said: "I'm looking forward to sharing songs from my solo albums and EPs; a few Starsailor tunes; and covers thrown in, of course!"

Tickets are available now from Glasswerk.co.uk. 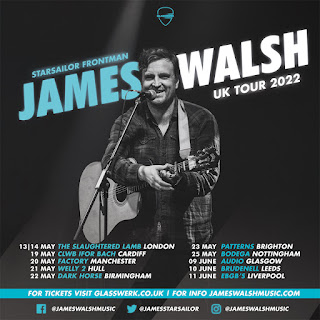 In the meantime, we'd also like to thank fans for their continued patience while we work on rescheduling the five postponed Love is Here 20th Anniversary Tour shows.
The dates that will be rescheduled are:
We're working with the venues to fit these shows in and will publicise rescheduled dates once confirmed across our website and social media channels. Additionally, we expect that ticket holders will be contacted by the agents through whom they made their initial purchase.
All previously purchased tickets will remain valid for the rearranged dates. Subject to availability, remaining tickets from the original dates will also be put on sale again.